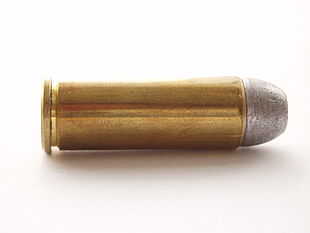 The .45 Colt cartridge, also referred to as .45 Long Colt, .45 LC, or 11.43×33mmR, is a rimmed straight-walled handgun cartridge dating to 1872. It was originally a black-powder revolver round developed for the Colt Single Action Army revolver. This cartridge was adopted by the U.S. Army in 1873 and served as an official US military handgun cartridge for 14 years. While it is sometimes referred to as .45 Long Colt or .45 LC, to differentiate it from the very popular .45 ACP, and historically, the shorter .45 S&W Schofield, it was only an unofficial designation by Army quartermasters. Current catalog listings of compatible handguns list the caliber as .45 LC and .45 Colt. Both the Schofield and the .45 Colt were used by the Army at the same period of time prior to the adoption of the M1882 Government version of the .45 Schofield cartridge.more